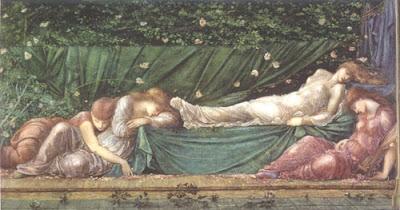 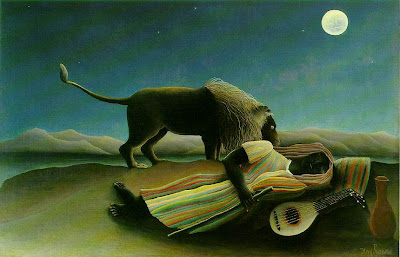 Excellent. You went all over the place this week. Happy Haiku Monday!

Cow tipping! I thought it was only an urban (or farm) myth. Bwahahahahaha.

I love the visuals especially the Gypsy moon.

Troll,
Thanks, I thought diversity was a good thing?

Moi,
God only knows what your friend Czar thinks of my invented word!
I'll blame Kafka for implanting the image which created the word in my brain.
GHM!
I sound like a politician.

Boxer,
The physics professors say,
"impossible!".
Every kid is the Carolinas says.
"Hilarious fun".
Their Mama's don't much like the barbed clothing or the mucky boots.

I love Rousseau's art. His palette!
His naive style! His humor! I wrote a paper in art school about my desire to have dinner with Rousseau to learn if my understanding of his humor/philosophy is accurate.

Rotty!
Such high praise, I am humbled.
I actually tried a funny little haiku about sleeping with chickens but feared I would get busted on accuracy:
Broody Easter chick
Nests upon her cabin perch
Dreaming with Koby

A fine mix this week. Remember the Wicked witch was evil not the apple. As so often happens the messenger takes the blame for the masters bidding.

An apple a day keeps the bends away. Hope you're having a good Monday.

What a lovely, fun, and diverse bunch of haiku you've come up with this week, Fishy!

Ah, now it all makes sense.