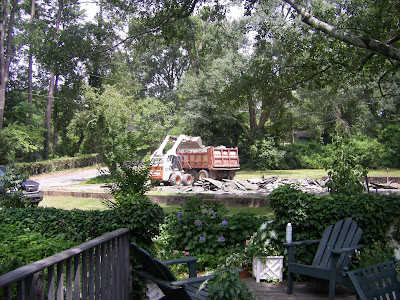 A dozen or so years ago when we moved here to the Pond our purchase was contingent on the findings of the inspections. The results regarding our WWII vintage home were excellent. But also within the report was this sentence, " The remains of a tennis court are visible in the upper yard".

Blowfish and I loosely planned to address the tennis court in time but it certainly was not a first year priority. When we did get quotes for the tennis court restoration we were drop jawed by the estimates. We then got quotes for removing the court and were  still shocked. So as 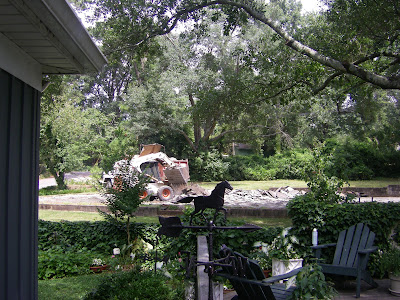 time marched along the court rarely made it to the top of the to do list.

The truth is we have added to the history of what we now know is the oldest private tennis court in the county.
There is a  lighted basketball court on one end which has hosted many a family game of HORSE. It also has been a fine locale for practice catching or pitching, also  a safe place for setting up obstacle courses for inline skaters. When Mermaid reached the age of bigger wheels then the tennis court became a parking lot for friends to gather.  It has hosted many an improptu dance  and makes an awesome canvas  for a large gathering armed with buckets of sidewalk chalk.  It even has hosted over the years, a few family tennis lessons.  It is true a ball could go askew if it landed on an uneven part of the court but  as the games were more about exercise and  family than competition we just laughed  and replayed the point.

Over the years our plans for this area have changed. Instead of  a tennis court restoration we've come to want a grass "sport court"  where we could host games of  tennis, badminton, volleyball. We have envisioned playing croquet, bocci , horseshoes , miniature golf, kickball and soccer  too. For years now, this has been our "someday" plan.

A while back we noticed an ad in the paper which said, " dozer work, reasonable rates".  This motivated us to start the  bids process again. It is an extensive process  starting with determining  a way to get big equipment into the yard. The project requires removal of 2 layers of asphalt, 8 inches of gravel , hauling all that off the premises,grading the subsrtrate, bringing in 4-6 truckloads of top soil, grading again before disbursing  fertilizer and grass seed. It also requires a talented equipment operator to keep retaining walls in place and to keep the stantions for supporting the nets. We found we could not afford the man with the " reasonable rates".

Blowfish shared this disappointment with a friend,
who knew a fella ,
who might could do us some good.

Unlike other bidders he did not come in a shiny new pickup with surveying equipment and laser measurers or e-mailed quotes 2 weeks later.  Mr. Trace came hot, tired, dusty at the end of a long day with his trailered earth moving equipment left parked on the road with the flashers winking. He walked the court, shuffled his feet across a few rough spots, took a hard look at how the retaining walls were set then said it would take him and his boys a fistful of dollars and  two days to do everything. Two days???? All the  other bids had been more complex, double the price and of much longer duration. I tried to be discrete in asking if we had been clear about the scope of our project?  W had.  The difference is this fella owned all his equipment, he was doing another project which required quite a bit of fill and the removal part of our project would serve both clients well,  the top soil would be coming from property he owned and  the seed from the farmer's co-op he belonged to at about 10% the cost of normal sourcing for lesser seeds. As the triangle between his location, his fill project and our project was "manageable" there were no fees for hauling or dumping. What did need to happen is the schedule of our project needed to be determined by the schedule of the larger, fill needing project. Fine with us!  No contract, no deposit, a handshake and a smile were all he required.  Amazing.

After he departed Blowfish and I reflected on our good fortune for a bit then I said,
" Did you ask him about license, bonding, or insurance?"
" No"
" Do you have any concerns the price billed at the end of the project will be more than the verbal agreement?"
"No"
" Are you 100% comfortable with this?"
"Yep"
"Me too but, I would never advise any of my clients to do business this way."

The good news? Mr Trace came as scheduled, did everything in two days as promised, did everything for the handshake price, did everything with a courteous skilled crew.  As I watched from the deck I thought what a fine antidote  from these tough years of bad business, bad ethics, bad economics, bad politics. I would far sooner trust the word and handshake of this man that any "leader" at any level. It is clear Mr. Trace would never let anything bad define him. We could use a lot more of that.
Posted by fishy at 9:21 AM

Email ThisBlogThis!Share to TwitterShare to FacebookShare to Pinterest
Labels: Let the games beginn

well mr trace is typical of the country way. people are always asking me did i have a contract with my builders and of course i dont. its all worked out 'cept for that rocky start with the jailbirds.

what i lovely home, fishy! very southern indeed. lush and green. loved your horse yard art. (i expected as much) but what? no mermaid figures?

Descent contractors are a rare breed. He'll really make his money from additional work referred by you.

I just had the same experience with a power washer who cleaned my house. He was a one-man company breaking off from another contractor for whom he worked several years. He had to change his quote appointment and his work appointment, but called ahead to let us know. Did a great job and at the agreed upon price. The Mrs wants him now to quote on painting the well worn aluminum siding that he just cleaned (had to be done anyway for the painting). So this guy will probably get the painting job because he keeps his clients informed with no surprises.

Chickory,
I cannot tell you how much I appreciate this straight forward, honest man. His very decency was a big factor in our decision to move forward with this project.

You are right,this is a very old fashioned "Southern" neighborhood.
Not unlike your beloved forest, I adore the embrace of our big trees.

The horsey "yard art" is an antique, cast iron weathervane mounted to a deck railing.
LOL no Mermaid yard art as yet. I might do a metal cut out one on a rod so she can dance out there in the blue hydrangeas. Unless of course, YOU want to create one for my garden?

Buzz,
I am shocked! For some reason I had the notion you did all that sort of stuff at your homestead. I agree with your Mrs., if you find trustworthiness companioned with skill, courtesy and good pricing it't a fine time to move along the to do lost while the fella is still available.

What a beautiful backyard. The sunlight through the green is amazing.

In the "new world", people have to realize it's a buyer's world and I have benefited from it too. I was able to have a contractor who is usually too busy to do some changes in my bathroom. And the marble piece I had fabricated? That shop was also slow and the men who worked on it spent much longer than typical because it was the only job they had that day.

Are you going to put in a grass court? No court? Please post the progress. I love these type of projects.

Boxer, thank you, I do love a yard that offers both sun and shade.

We have taken soil samples to the agricultural extension office. Once we have the test results we will know what sort of ammendments are needed and which grass will fair the best. Obviously the sort of putting green grasses are great for many reasons but we need to be practical and plant a grass most likely to survive without bankrupting us. The Pond does not have a sprinkler system and since we live at the top of a hill, digging a well up here is uber pricey. We never had to worry about watering or fertilizing the asphalt ;-0

A mans' got to know his limitations. I power wash and seal the deck every year (a 2 day excercise), but it's a 2 story house and I didn't feel like climbing ladders. The guy that did it was a much younger man and had it done in 3 hours.

Very southern indeed! Lovely lovely view and I can imagine that with your eye that the final design will be devine! Yes yes yes to posting pics to let us know how the progress goes. And really, some folks you know you can trust the minute you meet them. If he had been shady, you'd have felt it. But someone knew someone who knew someone and those are always the best recommendations.

Buzz,
Well now we know there are no limits to your wisdom! I currently have both wrists in splints because I didn't know mine.

Pam,
One of the loveliest aspects of living in the Carolinas is the natural beauty here. WE enjoy all 4 seasons but usually without extremes. When we came to the Pond there were peprimeter and foundation shrubs but not a single flower or landscape bed. We soon learned unammended natural clay is not a friendly growing medium as in the summer it bakes into a brick. So now, when we look out from the "Garden Room" windows there is actually a garden to see!

Soooooo right about Mr. Trace, a very solid vibe and the someone to someone connection was a blessing.