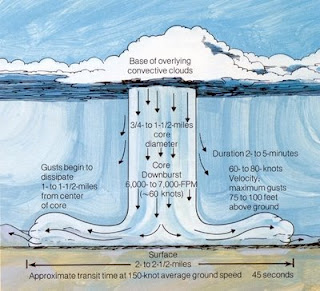 The meteorologists called it a "Microburst" which is Mother Nature throwing a big fit in a small place. Like the Pond neighborhood. Actually a microburst is as powerful and destructive as a tornado but the powerful force is not circular but straight down then up and out after smashing into our sphere.

56 trees down, 14 roads closed, multiple smashed cars and houses ( not mine) and countless grand old oaks and maples splintered. 15 thousand without power, the civic center opened to provide a staging area for the Red Cross and air conditioning for those having no other way to escape 97 heat.

If you are home when the environment is crazed you have a sensory perception which tells you to get to a safe place. Pronto. It isn't just the black cloud, or the knock you down wind gusts, or the lightening screaming across the sky horizontally. It isn't even the sound of the first marble sized, then golf ball sized, then fist sized hail pounding onto your roof and threatening to break your windows. Nor is it the terrorizing sound of 75 mph winds whipping the treetops
or looking out the window to see giant trees bend down in submission to this mega force.

For me it was the change in the air.
Like all the oxygen had been sucked out of it.
Like a tsunami sucks all the water off the beaches before returning in a rush to smash all in it's path. Only this was like the skies heaving in all the air and holding it for a bit before ejecting it back to Earth in an incredibly destructive manner. It made me turn and run for a small, hallway between master bath, bed and closet. A place where doors can be closed to all areas having glass. It was not a thought, it was an instinctive reaction. During the air uptake. Just in time.
The world shook, then the rains came cascading in sheets like I have never seen. 2 inches of rain in 40 minutes is not just another thunderstorm, it is an experience.

I saw a graphic on the weather report, showing how microbursts can slap planes out of the sky.
This one slapped the daylights out of my neighborhood. And it worried the heck out of Blowfish who feared I would be home alone and maybe in an emergency situation without help. He need not have worried. I am fine, our home is fine. 2 of our grand old trees have terrible damage but probably will remain standing. The huge limbs ripped from the trunks fell onto land or street.
Not even any of the fencing is down. Ours the only street for blocks with electricity. Spared.

Amazingly, like in the movies about the end of Earth as we know it, all of my neighbors and I opened our doors and went out to assess the damage at the same time. As if it had been choreographed. There is debris everywhere, roofs, lawns,streets, drives, walkways, hanging from the Magnolia like oddly conceived ornaments. Like the big messes in Florida after a hurricane. There were neighborly calls to affirm everyones safe status and then, with no commentary we each began the clean up.
Posted by fishy at 5:00 PM

glad to hear you are safe after such an event. more soon.

We had another lulu last night, it stayed just south of us, but a couple of huge pines in the neighborhood snapped off about 15' up the trunk. Thankfully, no one hurt and didn't hit the house nearby.

On the up side, wait till you see the prairie rainbow I caught as I dashed out in the rain and started firing off the little point and shoot camera.

What an alarm. Great description but ya is scarin' the fool outa me. Odd, but good, that yore street wuz spared. Mercy Fishy!

Wow. What a great description of a terrifying situation. I went through something similar in Philadelphia many moons ago; when it was over the side of our house was splattered with green/flowers/debris. The sucking of all oxygenn is something I've never experienced and I hope I never do. I'm glad you and your home (and new car!) are OK.

Thanks Pam! I expect out there in the land of frequent tornadoes this sort of aftermath has been seen.

Caroline,
Welcome to the Pond! Looking forward to seeing the Prairie rainbow ... is that the silver lining in your parts?

Aunty Belle,
Whoa indeed! I've never been in the throes of a microburst before and tell you true, it will be just fine with me if I never experience another. One of Blowfishes friends
had his house cleaved plus two cars smashed in the driveway. Very sad.

Boxer, You know what, it did in fact scare me plenty. I had actually arrived home just a few minutes before the Microburst and knew something bad was about to happen because all the birds were screeching and then went absolutely silent. Hitchcock could not have thought up anything any more frightening.

MRM,
We had two hospitalized but they should make full recoveries. What is really odd to me is the dates: here on the 15th, your location on the 16th. Here the span of the microburst is estimated to have been 2.35 miles in diameter. Our home was just about dead center. Which, it turns out, is usually not quite as bad as the perimeter. I probably won't sit in my porch rocker telling future grandkids about this storm, but I won't forget the experience anytime soon.

happy that you were spared! i know exactly what you mean about the air sucking out. in my recent storms, the trees were blowing wildly and then it just stopped to dead still. i thought to myself: this is bad. like tornado bad. later lighting struck and took out my tv and internet.

Chickory, you must be back up! This sure has been a stormy month. As if Mother Nature is disgruntled with us all. She has a right to be.

Sorry to learn the lightening took out your electronics, but at least you kept your cabin. We have "bundled" services so we were again without phones, internet or cable. I reckon it was a good thing I dashed thru the house unplugging every electronic we own.
Yesterday the phone transformer was replaced so land lines are working again. Tomorrow the new wireless modem is getting installed.

The lightening preceding the microburst was some of the worst I've ever seen. On the way home I actually saw a bolt hit the embankment by an overpass igniting a ginormous brush fire.

The "rain" associated with this weather event wasn't like any rain I ever experienced. Much worse than even bad hurricanes but of shorter duration. Our home might as well have been parked directly beneath a huge waterfall.It may not sound like much but truly 2" of rain in 40 minutes is a flash flood. Crazy.

I find it interesting the momentary stillness preceding your lightening strike and our microburst did in fact provide warning to humans and animals alike. I guess it is a good thing we pay attention. What do you do at Chickory for emergency communication? Ham radio? I was thinking there needs to be something like Onstar for homes.

Sweet Fishy, mommabear gets back to town tomorrow sometime, and I'm sure she'll be totally jetlagged. I'm pretty sure Summer Nights is the GO theme for Haiku Thursday. :)