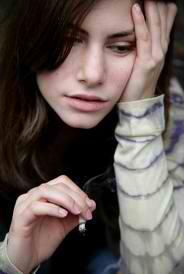 When Mermaid was in middle school, I encountered one of her classmates, loitering outside the food court, smoking cigarettes and hanging with creeps. I was approaching her from behind and as I got close to her I said, " Well damn girl, I sure am going to hate to be the one to tell your mother about this".

The creeps scattered, the teen got very pale and then angry. Before she could get her first furious salvo off I held up my hand like a street cop and said, "Hold that thought! I came over here to get a fountain coke at Sbarro. They have 'em watered down just the way I like them. You want one?" She opted for the coke.  We had a chat then I drove her to school.

It wasn't too long after that I observed another young teen girl about to get talked into a "ride" with some older boys of questionable intent. I remember thinking, " I wish I knew her Mom". Then it dawned on me that kid,and certainly those boys, wouldn't actually know if I did or did not know her mom.  So I walked close by, took a hard look at the girl, then the boys, turned back to the girl and said,
"which one of us is going to tell you Mom about this?"

Blowfish says I am a terrible busy body. Maybe so. I know I believe in the universal responsibility of adults to children. They don't have to be ours. I benefited from growing up in  a culture which was strong on accountability. I can assure you there was more than one occasion when someone observed my bad decisions and called my mom to say, " You might want to have a chat with Fishy, I saw her ....." There is no question the belief I could do nothing without being observed was a deterrent to poor choices. A good one.

Once, when I was stupid, I kissed a boy I shouldn't have. Uh-huh. We've all done it. My stolen kiss did not go unobserved and as it turned out the observer did not know my mother but did recognize me from church.  She  told the priest!  I am not sure which was worse but, I think,  the penance from the Priest was likely less than it would have been from parents.

These days teens can get into all the classic troubles and some a good bit beyond that. We have all seen or heard the horror stories of the apathy of JQPublic  while heinous events are being witnessed. Enter the power of the smart phone.  It is an awesome deterrent.    These days if you are out in public making bad decisions well you might also find yourself the star of a viral you tube video. Way more than your parents or priest will be watching.

I have taken the picture of one very angry man.
In a parking lot, yelling horrible things to a terrified woman. I took a picture of him and his license plate. He looked about ready to remove my face when I said, " takes less than a second to hit send". He got in his truck and peeled away. The  woman chased him, begging him to come back. She looked like she wanted to remove me,  not just my face.

In our little town a peeping Tom has been arrested.
People are shocked because Tom was thought to be a pillar.
And he was careful.
Wore jogging clothes, parked his car a distance from his objective.
A neighbor saw him, looking in a bath window at the house next door. The house with twin teen girls sharing a suite. The neighbor  yelled and the peeper ran.  A little time went by and the
neighbor again saw the peeper. This time he ran for his cell phone, tried for a picture and called for the twins dad. Tom got away. You would think he would never return but peeping is an addiction, like gambling or alcohol.  The neighbor and the dad took the issue to the neighborhood association. Seems like one of the locals had been suspicious of the parked car and had taken a picture of the license plate. Another had seen the jogger and said well it looked like Mr. Pillar. Right. Time went on and then one evening the observer called to say the car was in the neighborhood and the jogger about. The neighbor and the dad took up positions and waited for Tom. They were cool about it. Letting him get right up to the window before the neighbor popped out of the bushes to snap a picture. Dad was positioned to foil the getaway with a robust "halt" then a gunshot into the air. Tom stopped and the rest is pretty typical.

What is not typical is the way these smart phones can be used for this sort of good.
As can the internet and you tube. Maybe. Just maybe, there is hope in a return of accountability.
Those making poor choices today may not fear parents or priests but there are social pressures at every bracket. Would it not be wonderful if all this technology can become a deterrent to evil?

I'm sure to a large extent they would. When I was little the streets were no safer than they are now. We just didn't hear about crime as much or it was reported less. I believe communication has decreased some crime. Some people use their phones wisely.

Dan,
I disagree with you, I do think the streets are more dangerous now because of the cultural changes.

Troll,
I do think MUCH evil has been done via technology but the incredible good derived from technology is immeasurable. I would like to think how wonderful it would be if the reality of everyone having a camera phone became a deterrent to evil. There is something very satisfying in this thought. Have not cameras minimized the robberies of convenience stores and banks?

No woman should get in a car without a cell phone. A flat tire or car trouble is the main reason. Or if you're scared, think you're being followed. However, I agree with Troll; Youtube has done more evil with a generation fixated on broadcasting fights/etc. We recently rented a car and I made a quick video of the outside of the car because the attendant was not very attendant and there were multiple dents/paint scratches not noted on the contract. The operative word; smart phone but they have to be used by smart people to good.

Lastly, if I was ever in trouble, I'm glad to know they are "busy bodies" out there like you looking over for people.

Heh. My mother was one of your kind. Made for some interesting teenage years, I can tell you that.

Oh, and note to Boxer: no woman should get into her car without a GUN :o)

Boxer,
Ages ago, as a PTA mom, I took a class in recognizing the signs of abuse in children. In most cases, there were do nothings who minded their own business and let children suffer. We were all advised to step up, speak up and question. Same principles applied for recognizing elder abuse.

Moi,
You should talk to Mermaid! She will appreciate the comradery of knowing she is not the only one with a crazy mother.