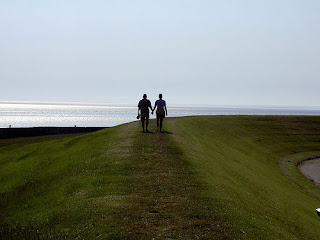 It was 1979 when I first laid eyes on Blowfish.
I was a college student pursuing my dream to one day be an interior designer.

I had a three hour morning studio class on Tuesdays and Thursdays.
Midway through the class we had a 15 minute intermission. To get up and stretch, to walk around and see what was happening on the other drawing boards, to fetch a cup of caffeine. One of those mornings I walked out the back door of the resources room and saw a bunch of boys enjoying a pick up game of basketball half a quadrille away. One of those boys was amazing.
He could fake out the others and zoom dribble to the basket in a flash. He could block boys much bigger than he and he could steal the ball and head the other way almost quicker than the eye could follow. Amazingly, no matter how surprised the other players were there was no yelling, no cussing and a whole lot of laughing. I have no idea if he was the best player on the court but it was clear, even from a distance, he was the guy having the most fun. Watching the game was a nice diversion before the trip back inside to the drawing board.

Bout a week later, I was rushing to cross a street when around the corner came a little brown MG Midget , top down and with so many bodies in it I thought it was a clown car. I just missed getting smished but before I could yell out my wrath the driver was looking over his shoulder, saw I was fine, smiled ear to ear and blew me a kiss and a wave. Instead of feeling fury I laughed out loud at that basketball playing fool of a man. Go figure.

Later that same afternoon I was stopped in traffic with a full view of the tennis courts at a condo complex where a couple of men were having a major volley. One of them was the basketball guy I had seen on campus. As I was watching , his opponent hit the ball to a position I knew could not be returned. To my utter astonishment this guy threw the racket to his opposite hand hitting the ball to perfect position winning the set. I could hear the joy of his laughter above the traffic. So there he was smiling in the sunlight, hair shining like a commercial and really cute knees.

But I was in that town for a purpose and it did not have anything to do with ambidextrous
athletes with shining hair or cute knees or what was clearly a buoyant tendency towards joy.
The following morning he walked into my first class of the day and announced he would be the substitute instructor for the balance of the semester. And he wasn't a boy. He was a forty something who had not lost his joy. Go figure.

Now there is another anniversary to celebrate. And Blowfish, while certainly not unchanged,
has retained the ability to truly enjoy fully life's simple pleasures. Joy and knowledge continue on as his two most favorite things to share. He still needs to exercise the body to clear the mind. As a bonus, he still has hair shining in the sun, is well muscled, trim and those knees are still cute.
Go figure.
Posted by fishy at 5:48 PM

Email ThisBlogThis!Share to TwitterShare to FacebookShare to Pinterest
Labels: Mermaid how do you put up with us?

i'll have to check out V's knees...see if hes got it goin' on. grherhahahaha happy anniversary fishy! maybe you can get a pick up game going!

Happy anniversary! Somehow I was picturing a Robert Redford type (The Way We Were Robert Redford) shining in the sun on your college campus. Ahem! No wonder you noticed! Plus the cool British sports car didn't hurt eh?

Morning ChickLady,
I'll look forward to the V's knees
report. How exactly will you do that?
Just stroll in the house and say,
"Show me your knees!".

Oddly enough I have given some thought about just what it is about those knees that caught my attention.
I've maybe figured it out. Have you ever noticed athletes have body types which get shaped by their chosen sports? Like basketball players have the most amazing arms? Well my Dad was a champion tennis player all the way into his late 50's. Dad has those tennis player knees. Since my Dad is a big, tall man, I think I must have spent a lot of my youth at eye level to those knees. Sort of like a baby duck imprinting on it's environment.
There are not many similarities between Blowfish and my Dad. But since Blowfish was also a champion tennis player in his youth, he has those same tight knees.
And they're pretty cute.
Go figure.

Mermaid!
Nice to see you at the Pond blog
:-)
VERY interesting to learn you find your folks all those things you listed. Makes me think of that time visiting in the Bluegrass when one of your friends said, "Your parents are still married to each other? What's up with that?" Your response was, "Of course! They have an unbreakable bond but they are unaware."
So funny, the things you learn from a much beloved child.

I met Mr. Boxer in 1978 on the ferry boat and I love hearing how couples met. I guess the universe really wanted you two to meet because you had so many near misses.

Happy Happy Anniversary to you and Blowfish.

Pam,
Not Robert Redford-ish at all.
And let me tell you on more than one occasion that cool British sports car nearly did hurt me plenty! But what is more fun than a zippy little convertible in a beach town? Not to mention sun bronzed, atheletic professors with a great capacity for joy?

Boxer,
On the ferry huh? Like commuters on the same ferry every day enjoying an evolving flirtation?
As for the Universe having a hand in this history, well it is ODD is it not?
I too loved Mermaid's comment. I think she had to grow up wise to withstand her quirky parents! Then too, Mermaid has the most generous spirit so she's been very wonderful about forgiving the inevitable mistakes all parents make.
Thanks much for the good wishes.

Aunty,
thanks much for the good wishes :-)

Thanks also for the nice comment bout our Mermaid. In case you get notional on that point, I'se way to partial of my girl to let her be getting adopted by other folk. No matter how nice and clever they may be.

Nice story and happy anniversary. I read the other post you referenced and have had times like that with the Mrs. Still do but we get through it. I met in in 1986 at a work happy hour (we worked for the same company at the time). It was a bar that featured backgammon tables. The Mrs challenged me to a game and we bet a date on it if I lost. I didn't know how to play and I discovered (years later) she cheated. Our first date was a George Carlin concert that I won tickets to see by answering a song question right on a radio show. So you can see the magic that started our whole relationship - 20 years later.

Buzz,
Do you still play backgammon with the Mrs? What's the bet these days? I sure hope it isn't who does the dishes or the garbage!
She challenged you and then cheated to guarantee a date with you? You are the chosen one my friend. The chosen one. Congrats on your 20 years. Some years I look at us and say, wow! how could anyone not believe in miracles?

Happy Anniversary to you and Blowfish. Hope you enjoyed it.

The first time I saw Mrs. Karl was in 1979, she was sitting on the hood 66 mustang that belonged to a friend of mine.(I still have a snapshot of her sitting there in my mind's eye) I had just returned from dive training in California. I convinced her she had to come to a coming home party for me that night. Then I spent the rest of the day putting together a party that didn't exist untill she had agreed to come.

Wonderful story, Fishy! I love the line, "hair shining like a commercial."

I think the more we stay with someone, the more it behooves us to look to the past to fall in love with them all over again. Because, well, as we all know, sometimes the present just makes us want to squish grapefruits in their faces.

I met S.B. when he answered my personal ad, a flippant couple of sentences I'd put in our local alternative weekly to play along with a neighbor gal pal who was dead serious about finding herself a man. I could barely make out S.B.'s reply, his southern accent was so thick. All I understood was "LSU," "guitar," and "dogs." My gal pal eventually returned to her hometown, deflated at her lack of prospects, while S.B. and I have been together 16 years. Go figure.

Karl,
Way to hustle up a lifetime date! I love that you still carry with you the image of your babe on the hood of the 66 'Stang. Guess it really was meant to be a party for two .
Go figure.

Moi,
Such good advice! On those days I seriously desire to smush a grapefruit onto Blowfish I eventually do one of three things:
1) stare at a picture of Blowfish from our wedding reception and try to remember just why I thought marrying this man was a good idea.
2) stare at our wedding date carved into concrete by others long before we bought the Pond and think hard about that message.
3) here recently I go wash the Fizz and think about what motivated Blowfish to give me this fab present after all these decades.

Obviously I agree with you.
We sometimes must look back to move forward.
Go figure.