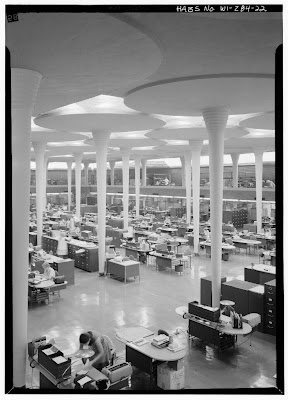 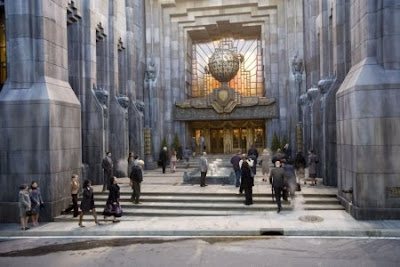 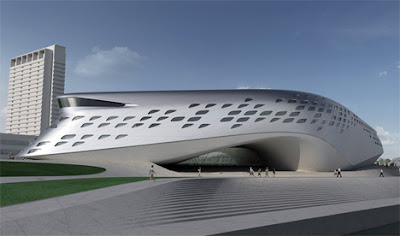 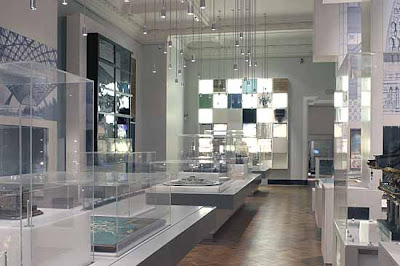 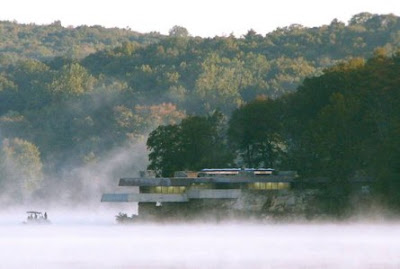 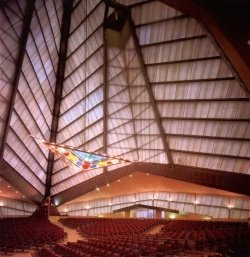 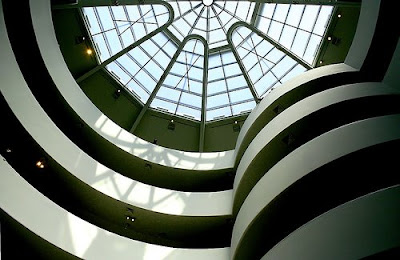 I was out traveling the interstate pretty early this morning. It was raining so most of the traffic was going slower, except for the truckers of course. I was traveling slower than my norm, even in the right lane for God's sake, in an effort to avoid impending carnage from truckers who apparently believe their schedule is more important than my life. The benefit of this slow right lane travel was I could watch the panorama going by and not just the traffic. I enjoy the look of the world when vision is diffused by zillions of little water molecules. It's more like looking at photography than the real world. The light is different, the cast shadows are softer, less discernible, edges are blurred; the known can look surreal.
About half way to my destination I caught a fragmented glimpse of an under construction building peeping out from the mists. That diffused vision flipped my brain over to a memory of a photograph of a Frank Lloyd Wright building. I love the brilliance of Frank Lloyd Wright, and yes I do know many of his buildings have failed or been horrific maintenance nightmares. I don't care, I love this man's work. He so beautifully understood the need for light, sky, water, earth in the human psyche he seldom created a structure without incorporating these elements. He knew so well mankind needed more than shelter from a structure. He also understood form and function , although the famous quote of "form follows function" does not belong to FLW but to Louis Sullivan.
Frank was ...just magical in his ability to balance the right and left brain aspects of design and construction. He also, obviously , was quite the salesman. By all accounts he was irascible and a difficult personality and yet he could persuade , corporate boards, review boards, municipalities, universities, churches, individuals, banks, and contractors, to get on board and pay him to create, finance his visions, and erect his images into awesome realities. OMG!!!!!!!!
So, as a mini tribute to Frank, I invite you to send photos of your favorite Frank, or if you have them to share, your favorite Frank stories. I have added a few pics for your appetizer!
Posted by fishy at 8:29 PM

Uh-oh.. Fishy, sorry, but I doan like most of Wright's stuff--a heap of utilitarian clinical post-modern deconstructionism. It ain't human friendly.

I does like the Gugg's ceilin', but the exterior is UGLY. Fallin' Water house is oaky, but gag--all them "prairie" houses he dotted all over Wisconsin and the midwest? Yick. NEar us is FLorida Southern--a campus that is FLW--UGLY!!! An low--the man must a been a midget--all these low corridors.

As fer other Franks--uh, that Gehry music hall in Los Angeles (Walt Disney Hall) is fascinatin' in the same way cosmic wreckage would be a wonder to see. Same wif his "city of wine" --looks like fossilized galatic vomit.

you have me as a fan Fishy, probably because I don't know enough about these things to truly know what I should know. But, I spent a day at Taliesin West a few years ago.... wandered around the grounds, sat in his chairs and watched a friend play the piano in the underground music room. I was enchanted.

Aunty Bell, you always maks a good splash! I don't take umbrage at your lack of love for FL. I spect you noticed I did not include pics of the Florida Southern campus cause it surely isnt amongst my FLW favorites. And his furniture is, well...ugly and uncomfortable. Might even could be put to good use down in Guantanamo. HOWEVER...the man changed architecture forever. He changes construction methodologies forever and he certainly gave us awareness of sculptural form in buildings and he definitely stroked our psyches with his infusions of sky, water, earth within our structures. Not a small measure of accomplishment for an extremely short man with a cranky, disassociated demeanor. His genius cannot be overlooked and did you notice there were no Prarie Houses in my posting? Surely there is one FLW you respect?

Hey Troll,
Clever of you to know about Louis Sullivan.

I wish some of the truckers on my patch of the interstate would get themselves on the NASCAR track just once! I believe those NASCAR pros would but up with their reckless intimidation driving not for one full lap. Think Pit Stomp in place of a Pit Stop!

a.b.,
Glad to hear you had the opportunity to visit and enjoy your journey to Taliesen West. Back in my getting prepped for my future days, I did a 4 month internship with an architect trained at Taliesen West. He was another cranky little man like FLW . His architecture studio was situated in the lee side of a sea grassy dune next to a little path that took one to the most awesome view of the Gulf of Mexico. I ran that path in tears many a day. That disciple of Frank wasn't a silent, cranky disciple but a meanly verbal avenging warrior to the precepts of FLW and woe be to any intern who did not show respect for all things Frank.
Funny thing, I learned more from spending 70 unpaid hours per week in his beachside architecture studio than I did from any of the projects we worked on. That building was brilliant, nestled in it's environment, built of aged and reclaimed barnwood, metal roof, 3 sides wrapped in porches for deep shade, situated to collect prevailing winds in a structure designed to direct cross ventilation through the tops of the vaulted exposed rafter ceilings to wisk the rising hot air away from the inhabitants, clerestory windows placed to spill light into the studio like light rays finding their path through a tall tree canopy. By the end of the internship I understood the gift from FLW is the peace of being at one with God's created environment for us can be just as awesome INSIDE the slap of a cyprus screen door.

Sorry Fishy,
but them Gators is puttin' a whuppin' on yore boys. Jes'a condolence note, Sugar.

the scale of the second photo is a bit oppressive to me. i hear the emperors theme from star wars now. grrherhahahaa. aunty got it right with "totalitarian". i think part of that is because of the materials. im more of a frank ghery dog myself. i think there is too much order to FLW - back to authoritarian again - but the cantelevering is cool. some of the design work is okay - the windows and the chairs with the sectioned up backs.

K9,
Nice of you to splash on over! I love the music to Star Wars...but just think K9 , that Frank building was conceived and built 50 years BEFORE Star Wars. The man did take architecture as art in a totally new direction. ie, one man who changed the world. WOW

K9,
I forgot to ask in the last comment, but Ghery? Don't you find his stuff manipulative and torturous? Maybe even unfriendly to the human psyche? I agree it is very creative but perhaps a bit too contrived for human comfort. Course, being a Rotty it might really appeal to that leg lifting activity.