Welcome Haiku-ers to The Game.
Of course there are some who think the Big Game is about  the Super Bowl.
Like that other game, our weekly haiku contest  is eagerly anticipated. I've already received several  foot tapping, harruummppphing  messages reminding me Friday was POST DAY.

After the shock of the Oops win over at Serendipity Do Dah's I spent some time thinking about themes for this week. I finally landed on a subject I thought had not been done and would be fun when  one of my projects went into overtime leaving none for games.

Somewhere, in the midst of this 2880 minute drill, I lost interest in the original theme.

Maybe it got hijacked by all the hype about that other game.
I think the Super Bowl Season is the  Season of Lucre for those in Advertising.
They have reached saturation via every media form possible. Some of that seeped in.
Or, maybe, it was Blowfish  who thinks far more about the food for a big game day than the game.
Or maybe it was his foot tapping, harruummphing impatience over no posted  Game Day Menu for the Pond. It is a well known fact Blowfish  enjoys his food best when he has had time to  anticipate every offering.

Last night I arrived home late. Again. After our normal dinner hour.  Blowfish was so puffed out he looked like one of those WWII mines waiting to explode with minimal contact. Here it was

Friday Night on Super Bowl Weekend
and there was  no dinner and no menu posted for THE GAME.  Even worse, there was no stocked larder or stuffed refrigerator for him to investigate the mystery of the menu. Alarmingly, he had not been sweetly summoned to fetch in mountains of grocery bags from the Fizz.  Before I got my coat shrugged off he was saying, " Fishy, I've been thinking it sure would be great if you'd make us some of those sweet, juicy, baby back ribs for the Game"

So now you know.
Our theme this week is
Menu 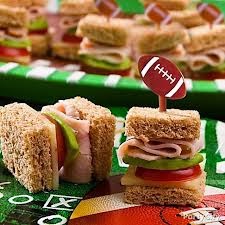 Just to start things off. And I am up.

Dinner, She Suggests
what do you desire
roast beef, pork chops, anything
move closer, said I

Eyes And Space
delicate to filling
sweet, savory, meaty - what?
one of each, thank you

Choices!
what is wanted, liked
too many choices not enough decision-fu
simply cannot decide

Yeah, I know, the last one isn't right in the count. Go figure.

On the pleasures of feeding a vegan relative..

(Is there an emoticon to show the wringing of somebody's neck?)

(language was not really this benign)

Well, Fishy, sometimes life happens, and intentions have to be revised. There is plenty of time. Schedules, menus, whatever.

Like mine today. None of this was planned - we were actually supposed to be out of town, but things evolved, and we were still home when I got the phone call for help from an elderly friend. After I got her printer working we had another computer lesson:

Then I continued to the store from some ingredients for a supper to go with the banana bread I was already making:

For a dying friend,
and her much alive spouse,
what shall I cook them?

As I was mashing the potatoes, just about ready for delivery, whump! What was that?

I should have a visual up shortly.

I hope the "spiky mine", er Mr. Blowfish, likes his game day goodies. I am sure he will. Like I said, your quiet and refined humor always comes through. It always makes me smile.

here are my entries


Im not in it to win it. just playing for fun. so dont judge me! LOL

Oh, me neither as far as the judging goes it turns out.
Life and schtuff has and is getting in the way. Good to see the chick out and about though. Nice entries so far.

Doom,
I might be a mite uncomfortable with your lead in lines. If your haiku is on point then no lead in is needed.

The second two are off on the counts if you want to correct them.

Foam,
There absolutely should be a neck wringing emoticon! I seem to have reached the stage where I want to tell people we will provide the beverages but they can brown bag their own food! Too many particular eating habits, mine included.

Serendipity,
What a wonderful job you did in keeping the joy in an unplanned day.
I am sure your friends and neighbors appreciate you regularly. As for the Hawk, well his menu was on the fly wasn't it?

Becca,
You're a softie!

Chickory,
You know that is too funny, it does seem the Mexicans can create a vast menu with the same ingredients!

Yes to your observation, I have to swim carefully when the food supply is low!

Serendipity,
I know a puffer fish who does not need a Bowl for his nachos either, he's a bag man.

Congratulations on your win! Nice to see you play. Thank you for hosting this week. I haven't watched a football game in years, however it seems a little sadistic of you, torturing poor Blowfish on the menu for the game. To my mind PB&J barely qualify as survival rations. I'm hoping he was able to find something to suit his palette, while enjoying the show.

I offer 2 for judging:

Part of my angst at football:

@ Chickory: Judge you, no. Miss your wit and wisdom, yes.

Ooh congrats fishy, I have yet to meet you. I own the blog www.funkyfrugalmommy.com. The game you say hmmm so many options in which to ku about... here it goes...

Blank staring faces
No emotion as cards lay
What hand were you dealt?