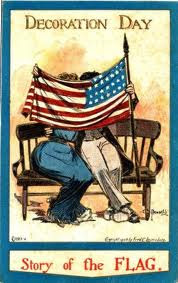 It so happens my 19th year,
I was at my Grandmother's home on "Decoration Day".
I knew the day to be "Memorial Day" but since that was a name change in the late 1960's my grandmother paid this "no nevermind" preferring to maintain loyalty to the original label.

I had noticed in the week leading up to this day there had been an unusual amount of telephoning in my Grandmother's life. In her house there was one  land line phone with a very long cord so she could move all around the house and not be "tied to the wall"  in a single location. It worked well for her but required astuteness on the part of those sharing the house with her. The unaware could find themselves kissing the hardwoods without notice. Since I had been stellar at jump rope on the school playground I was not often the one face down on the floor with depleted lungs.

In addition to all the telephone traffic there were numerous trips to the grocers, butcher, baker. I was dispatched to the alley way garage to find and organize for transport baskets, gloves, hats, gardening implements and old blankets.  Eventually I got around to asking why we were all so busy?

" It's  for Decoration Day."
" Isn't that a parade with horse drawn cannon and old men in funny uniforms?"
" Mind your manners Fishy."
" Huh?"
"Ladies do not say 'huh?' and it is impolite to disrespect the dead who suffered for you"
" Yes ma'am"

She went on to explain on Decoration Day every one got dressed up to attend  a 9am Mass
in honor of "the Fallen", followed by a progressive Brunch from house to house of family members on all sides. Most of the telephoning  and other busyness was about who would be progressing and who would be hosting, the menus, the flowers and the all important question of who would be wearing what.

" Well then, why do you  keep sending me out into the alley to organize and pack  all the gardening stuff?" 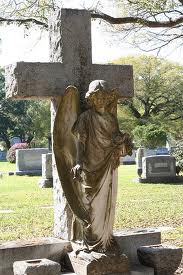 " Because after Mass and Brunch we will  dash home to change, gather our picnics and our gardening equipment to meet up with the others at RoseLawn by two."
" RoseLawn?"
" The cemetery"
" Did you say picnic?"
" Really Fishy, have  you never been to a Decoration Day before?"
" Apparently not. I am sure I would remember picnicking in a graveyard "
" Watch that mouth Fishy!"
" Yes ma'am"

Exceeding all expectations I loved this day. The Mass and Brunch were pretty typical. Not much different from a normal Sunday schedule. Since this was in the days before the South allowed boozing and retailing on Sundays most of the time we had  family gatherings or went visiting.

RoseLawn is a beautiful old fashioned cemetery with huge moss draped oaks and family plots defined by azalea hedges,  roses, camelias and  statuary.  This was long before the days of flat markers and plastic cone shaped floral insults.  These were gardens of eternal resting.

When we reached the cemetery we joined a long winding caravan of cars slowly making the way to a chosen spot. We were bound for the grave of my Grandmothers second  husband
(not my grandfather). He was not one of the "fallen" from military confrontations he had fallen to heart disease a decade before. His placement is graced with a life size angel statue so it was easy to find. We left the picnic in the car, but unloaded all the gardening gear and hiked over to the grave site. Hundreds of other families were doing the same thing. The common purpose was to first groom then decorate the grave sites followed by story telling and honoring of the occupants with food and music. It was a very festive and very social occasion. There was friendliness toward the neighbors families there for the same purpose. There was the sharing of the stories of the departed; some riotously funny, some  piercingly sad. Once the  headstones and statues had been scrubbed new, the graves  weeded, pruned, clipped, and nourished;  we hauled all the debris and tools back to the cars then returned with the blankets, our picnics, fresh flowers, flags and musical instruments. 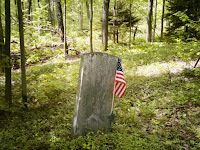 Every grave was groomed and decorated.
Even those looking forlorn and abandoned on the perimeter of the grounds.  If there was a site with no family there, then those in proximity did the grooming and the decorating. And the talking. I don't mean talking about those resting on the other side of the grass, I mean talking to them. In the South, talking to the dead is a common practice. Now that my Mother is gone I completely understand this.  I talk to her often. Out loud. Which is a concern for Blowfish. He is a Yankeeman who does not walk around talking to his parents.  He thinks about them,  prays for them, but he does not talk to them as if they were right there with him. I suspect he thinks I am a  bit "off ".  If he had ever been to a Decoration Day in the South he would not think anything of my chatting up the departed.

Younger children were given flags to plant next to the graves of those with no family present to do the duties. Children being children, they interspersed these duties with impromptu games of hide and seek or tag or jump the stone.  There were a few injuries. Many of them had been told to read the name of the occupant and say a little something to him/her while placing the flag. Kids are kids everywhere so what was heard were things like, "here lies Fred because he's dead!" or " Old Mr. Hopper told some whoppers!" I doubt these were the sentiments parents had hoped to hear but then they would shrug and grin and say something like, " Let's hope Fred has a sense of humor."  My favorite was one which said,

"It is best to carve  love into hearts before granite"

As day passed into dusk the musicians started strumming guitars, banjos, fiddles. There were plenty of  plaintive wails from harmonicas and more than a few singers who had obviously broken the Sunday drinking bans. Children danced between the headstones waving their sparklers  while the seniors quietly  reminisced.  In our group  there was a lull in the conversation when a brother in law of my grandmother stood up and started to sing,


"My Country Tis of Thee, Sweet Land of Liberty."
May this forever be true. 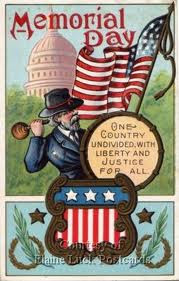 God Bless You Each and Every One

Wonderful! I wish there was no retail or booze on Sunday as before - a day to be home with family is a good idea. This reminds me so much of Day of the Dead in Mexico. It is the day that marigolds are torn up and petals laid on the streets leading to the cemetary. there, just as in your decoration day, the graves will have been cleaned and painted bright colors -there would be music and lots of drinking. the favorite foods of the departed would be offered.

I like your southern version. Its too bad that cemetarys now are designed to make it easy to MOW. meaning -the flat headstones and no statuary. Look how much of life has become about convenience.

Wonderful evocative post. Have a blessed, thoughtful Memorial Day, as I am certain you will. xoxoxo

The only person in my family who served (Korea) is my stepfather. He's still living, though. But on this day I do like to think of my grandfather, who died from TB at 30 years old, contracted while serving in WWII, and my great uncle, who was a captain in Rommel's Afrika Korps. He once told me one of the happiest days of his life was when he was captured by the Americans and shipped to a prisoner of war camp in Colorado, because he was no longer under Hitler's thumb. He had a big scrapbook of his time there, which included membership in the band and drama club, and spoke of his tenure with a lot of fondness, almost as if it had been some great, fun camp for kids.

That says a lot about our country, right there.

Have a wonderful day, Fishy, and thanks for the story.

Another wonderful glimpse into the Fishy Family and the core values that formed our Fishy Friend. Wonderful story. We have very few cemeteries around here that are more than flat, convenient to mow type. But they have a beauty in their own way. We put out some flowers last night and marveled on some of the decorations others have done. God bless you and yours, Fishy!

Chickory,
I love the image of Marigold strewn streets and painted colorful headstones! It think Decoration Day started as an honor to the Union soldiers by cleaning up their graves after the Winter heaves and thawing.

If I lived where there was family near, I would host a Decoration Day
brunch and story telling. My mother learned family folklore like we learned nursery rhymes. A lot has been lost. I am a good few decades past 19 so this is clearly an experience which stayed with me.

Moi,
How interesting your Great Uncle was relieved to get captured and sent to Colorado! Under what flag is he buried? Maybe he was blessed to stay in America! Land of opportunity, home of the free and the brave.

Pam,
We all have to be shaped by something! Like everyone some of my life shaping events were good others ...well..... not so much.
Like you and Chickory have mentioned, graveyards now are about mowers and maintenance and money. Here in PondTown there is a lovely old, pre Civil war cemetary which is gorgeous. The neighborhood surrounding it is horrifying. Our different service organizations have a day once a year where hundreds come out to make this beautiful resting place squeaky clean, groomed, honored. I am so glad they do this and glad the local dealers, tutes and gangs leave the residents in peace.
God bless you all too!

I often visit the cemetery where my mother is buried. I was there this weekend. No big cermonies or picnics. I clean up the stone (a lot of geese in this cemetery), trim the grass and sometimes change the artificial flowers (she liked roses but I like to be seasonal).

Different sections of the cemetery dictate the type of stone you can have. My mom is in the flat stone section. She picked it out when my father died.

My father was in the Air Force, but not a war veteran, so their grave doesn't get a flag and armed forces medalion from the county. I do that myself. And I straighten all of the ones in the area that get blown over by the wind. It's interesting to see some of the grave sites that are well tended even though the year of death was decades ago. And other more recent dates - get nothing.

There's one marker a few stones away from my mother's that on every Memorial Day and Veteran's Day has a new Marine flag and 2 beer bottles (necks in the ground) in front of the marker. Now that's a friend.

Thanks for your story.

I loved this post. My people have little here in the PNW that is "family" but my Father's ashes and marker on the Island and I made a visit this weekend. I loved seeing the other families and the flags.

hate ter think it might be 4th of July afore we git a new post over heah.