Blowfish is going to be the death of me.
Of course it will be attributed to an "accident" or "poor health".
Just someone please stand up at my memorial and shout out, "he did this!" 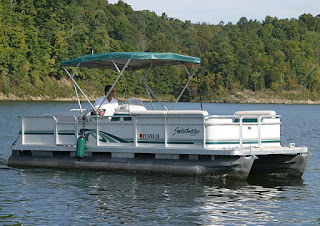 Back in February Blowfish decided he would dismantle our pontoon boat and refurbish it for the boating seasons. His plan was to take everything off above the pontoons and structural beams, replace the deck, re-carpet the deck and the seat  bases, upgrade the console, clean and seal all the rails and side panels , possibly re-upholster the bench seats and replace the bimini.

I've lived with this man for thirty years so my first response was "don't". For any of you out there who remember the visual from Blowfish "fixing" the hammock ...well you will understand.
Of course, I was not heard.

Next I guaranteed him Blowfish Boatworks would not reside at the Pond.
A war ensued. It was  ended by my absolute promise if he even started the process on this property there would be a  most unfortunate explosion. I encouraged him to lease warehouse or storage space and move the boatworks project off site. He did neither but somehow it came about the boat would go to his son's property where together they would have this wonderful project to bond over.

I think the stripping down to the beams part went pretty fast. Blowfish would frequently head to the truck with a jaunty step and a 12 pack. I would recommend keeping the pack on ice until the work was finished for the day. I was  waived off. When I asked after the progress on his stumbling returns the answer would be about having accomplished little on the boat project but oh what a great time they had "bonding"  at the shooting range results and the beer.

Repeat that last sentence once a week for  three months.

During these months Blowfish would occasionally say  something like, "We probably can't have "turquoise seas" carpet  color Fishy, they  only have beige now. The economy. You know." This would prompt a 30 second trip to his Mac to fill that ginormous screen with the home page of the website for the carpet, the adhesives, the whatever you need because the name of the have it all site is "getpontoonstuff.com."  Then too, our boat is a Sweetwater brand and guess what?  Yes! They too have a website for ordering everything you need for every make and model of their boats.

Blowfish is definitely one who, if something works for him once, he will endeavor to have it work for him continuously. I do get that he spent years with secretaries and assistants of every sort but I was never one of them and have never wished to be one. Blowfish likes to refer to himself as  an "idea guy" so he will say something like,  "Listen Fishy, can you source a boat blablah while I think about how I am going to  use it"?

If I were not ever vigilant that man would suck my life down a black hole.

Recently when we were out and about crossing the double bridges

on the big lake  I sighed a bit too loud. Blowfish wanted to know why? Laughing I said it was just our luck we had endured years of drought but now  the lake is at full pool for the first time in five years and we have no boat!

Blowfish lamented with me because it seems, every time he had the opportunity to work on the boat, those Spring storms which filled the lakes and ended the drought had also prevented boatworks progress.  I do know this is true but had he rented warehouse space or better yet, sent the boat out to the pros then you would not be reading this post because I would happily  be out  on the lake.

On Tuesday Blowfish said,"Fishy,  tomorrow I will be  ready to put the carpet down on the new deck but first I want to roll it out here to check for flaws, cut off the extra 5 linear feet we ordered and take only the part I need out to the boat. Can you help me with this?" This was just an innocent sounding version of,  "Come into my house said the spider to the fly."

Once the carpet was checked, cut to size and re-rolled guess what? " Someone" needed to go with him to the boat because he could not do everything alone....to bulky and so forth.  Blowfish's son has MS so working in the hot sun is a serious no-no. Because the boat did not get finished during the cooler months, he was no longer available.  I knew his question was a set up. But, I also thought it was a bad idea for him to be out there alone. The weather prediction was for no rain yesterday and today, with temperatures  93-95.  I did not want to get involved in this project but it IS June and family are saying, " is the boat ready?"

The carpet is installed. Straight, no wrinkles, no cuts , no blobs of glue mar the carpet.

Blowfish and I look like disaster victims. He has no skin on either shin. One shin has a goose egg the size of a chicken egg with a skinless gash through the middle. One of his trips to the storage shed resulted in his surprise descent between the storage  building and the steps. It was not pretty.  We had to do a bit of first aide so he would not bleed onto the new carpet. We were too hot and  tired to go home and come back so we cleaned him up with bottled water , did a 5 minute compression and  applied every bandaid we could find. Somewhere in the Hell of the afternoon I realized we were both on the verge of heat stroke so we cooled ourselves down with the melted ice from the cooler. Blowfish has stents and a pacemaker so he takes blood thinners. His forearms are discolored from elbow to wrist with every shade of bruise and contusion, from assorted scratches and punctures and hits. He looks like someone tried to beat him to death with a baseball bat.

Me?
Well one of the things that did not get ordered or rented was the weighted roller needed to properly install the carpet. So how was it done? Yes!  Of course! With a  RollerFish on hand who needs industrial  equipment? Think hours in direct sunlight, in 95 degree temps, on hot marine carpet made of spun polypropelene, with my nose sniffing carpet glue while my knees were burned into raised blisters from the heat and friction while I strained every millimeter of my arthritic spine  trying to fuse the carpet onto the deck.

Guess what?
Today Blowfish brought the newly carpeted boat platform and all the unattached parts home.
Why? He says he wants to work on it here.  So I can assist him.
Y'all be sure to say something nice about me at the wake.

Be happy fer the rain, no drought, by next yeah, them men will have gotten thangs pieced back. Thang to keep in mind is no fell ever had hisself a good time following' a woma's suggestion.

Not fun now! But all that work will pay off later in hopefully relaxing times
.. and what aunty said concerning fellows .. :)