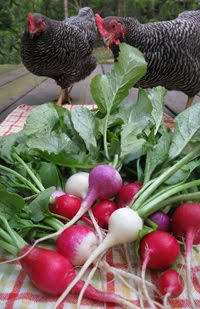 Yesterday was Haiku Monday, hosted by Chickory
with the theme of  "Las Vegas". The game was different this week as Chickory is , or was, in Vegas and,  it seems as if her impressions were of noise , tattoos and  the underbelly of humanity.

But! Being Chickory she also added a challenge to be creative with the subject and, as an additional incentive, one could win " a tacky trinket from the  airport".  Who could resist such an invitation?  Not me.

Alas I know nothing of Vegas. Really my one trip there was at age 9 where I, along with siblings, were parked in the family sedan on the strip while our parents were inside a hotel. Now I think it must have been not just a hotel  but a casino too. If I retain an accurate memory of  this event if was of being hot and irritable and  more neon than I had ever seen before. (This does sort of illustrate how much things have changed. In 2012  no parent would leave three children under ten in a parked car on the Las Vegas strip for a minute. Not one).

So there I was, seated before an empty, haikuless screen trying to think about my impressions of Vegas. Of course in an incentivised, creative, trinket dangling sort of way.   Out of the blue I started laughing.  How many times did I see an I Love Lucy rerun with Lucy in Vegas, descending the stairs wearing a chandelier for a headdress? Just about as funny as the one with she and  Ethel making chocolates. So I went in search of images of  Lucy as a Vegas showgirl  for my visual  haiku and found these: 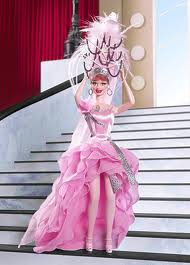 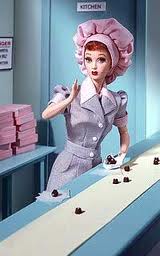 Who knew there was an entire series of Lucy Barbies?
Certainly I did not.
So I continued my search,
eventually finding this: 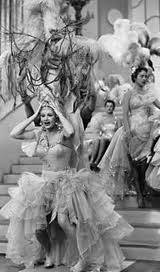 Which made me think of this: 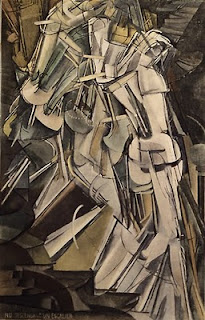 So.
Thank you Chickory!
I laughed all day.
Posted by fishy at 9:22 AM

haha i love Lucy she was so funny and brilliant

I'm sorry. I can't get past the fact your parents left you all in the car! Bwahahha. Oh, how times have changed. Nice post. I always love hearing "fishy backstories."

Becca,
Beautiful too. Some of the early photos of her,before she became a comedian, are breathtaking.

Boxer,
I love that you "hear" the back stories. Bravo on your three wonderful haikus this week!

I never saw this episode. Watched little TV as a kid - homework first. But I do remember Lucy. This prompted me to look her up.

What an amazing and long-running history she had! Talented, lovely, and apparently pretty sharp.

Thanks for making her suface with your haiku.

Way to go Fishy!! Congrats on yore win. No need to think up yore theme--since the winner ya pick will be announced on Judgment day. Ahahaha!

congrats Fisher!! Did you know there is also a barbie of Tippi Hedren as Melanie Daniels in the Birds? The green suit, the perfect chignon messed by the attacking attached crows. when they make a kim kartrashian doll Im moving to Iceland. I swear to God!

happy haiku, er, thursday, and thanks for the story. I thought you were gonna say lucy was some crazy ho that came to the car. grherha

Serendipity,
You researched Lucy because of a haiku? You rock! Also, I agree with you, Lucy was an amazing talent.

Aunty,
You know as it gets closer to "Judgement Day" the harder it is for me to click on a tv or open a paper. I am so shaken by the enormity of the divide, the risks and the power of hackers to eradicate our votes and hijack America. Terrifying.


Chickory,
We will all be waiting to hear if your V has come down with the plague from handling those slots.
If he escapes flesh eating infections he is a winner!

Now on to the real question:
Is Vegas as surreal as a Duchamp?

So Fishy, since you won, what is the new theme?