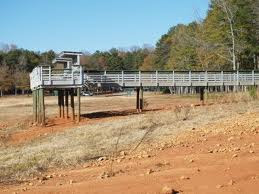 We took our ratty old pontoon boat out on the BIG Pond this week.  This is one of the lakes created by the Corps of Engineers back in the  50's and 60's. There are several rivers which flow through this lake/reservoir so there is a section within the lake known as the ' big water'.  Even here there are markers indicating hazards due to the falling lake levels.


Did I mention big? This lake  has about a thousand miles of shoreline and spans some sixty thousand acres. I cannot do the math to say how much water has been lost but I can tell you it is a ginormous  loss to bring a lake this huge down 14 feet and still dropping. Folks who payed big money to live on the lake are grieved. 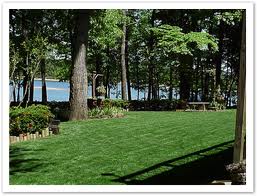 Many of them have docks which are no longer in the water, cannot get permits for dock extensions and cannot get a tax reduction on their unusable lakefront  properties. One of our friends has had his custom lake home on the market for the past three years.  No takers. His dock is high and dry, his  irrigation system which pumped water from the lake is now illegal. So his yard is no longer lush and green.
It is gone! It isn't possible to sit out on his deck to enjoy the sunsets because the insects are ferocious. There is something about a drought which increases the insect population exponentially. He is feeling  abused. Mostly because he invested in what was once prudent and now is not. Sound familiar? Yeah, me too. 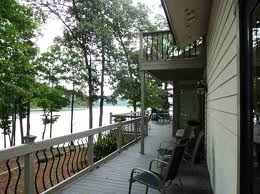 The wisdom of the Corps of Engineers is questioned in the paper almost daily. The Corps is still in charge of how much water is released from this reservoir. Somehow the needs of the  people and fish downstream always trump the needs of those of us on the lake. If recent articles are accurate the amount the lake would be down from nature is about 5 feet.
The devastating additional 9' water loss is due to sequential   decisions by the Corps.  I expect bombs or lynchings any day. Folks are way past furious about being selected  to be devastated. A huge class action lawsuit is brewing. I fear this will be just one  of many, many water wars to come.

This time out instead of  using one of the numerous public ramps we went to a marina and paid to use their ramp and docks. Commercial docks are much longer so they still  have some water. More than a dozen of the public ramps are now closed because they no longer terminate in water. There are new hazards of every description.  I am stunned and appalled by the things  people have been throwing into the lake for years. I guess to avoid dumping fees.  Even with all the difficulties, hardships and heartbreaks all around the lake it remains, for me, a great get away day. I love being out there! It isn't the beach but somehow this too is a place where I can actually just .... be.  I can be content to do nothing! I need not even talk.  I can just  sit back and enjoy the wind cooled air, the smell of the evergreens, the picture cloud show, the fish jumping and the birds singing. If it gets hot Blowfish will stop the boat in the deepest coolest water for a refreshing plunge.


If our Spaniel is with us then we will beach the pontoons on an island and let him wander contentedly while we swim.  Now, because of the drought, the shoreline is rocky where once it was relatively clear. We stay away from beaching along a mainland as there are new issues here too.   There is a rising  problem of dogs on the loose around the shores.  The  ground is shrinking so there are gaps under the fences allowing the dogs out onto the rocks and into the waters.  Not all of them are  friendly.


Sometimes we go on a "dinner cruise" launching in the late
afternoon and bringing a picnic supper. These are  especially nice outings as the lake is often quiet with little boat traffic and no constant buzzing from the jetskis.  There is a "bird island" which is home to large cranes and herons. Watching them return to their treetop nests for the night is captivating. Once we watch this ritual we head back to the docks . If we have things timed well we have the boat out of the water and onto the trailer in time to enjoy the evening fadeout from blue to orange . Islands become quiet,  trees present as a unified silhouette rather than individual species, the water looks like molten liquid and  I feel  the foreverness which survives mankind and droughts alike. 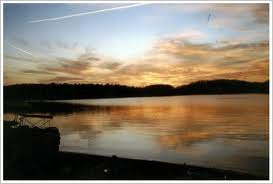 Things can go so terribly wrong when we mess with nature, and that's a shocking water loss. I'm sorry--your post is so bittersweet.

Still looks like a lovely body of water for the boat, and an evening. That is a problem with reservoirs, man can manipulate them, and often does for reasons that are unclear. But here in the west, irrigation demands draw our waters down seasonally ad leave a lot f mud bottom showing.

Lovely, if melancholy, post Fishy, and nice 'ku with the mason jar filled with flashing bugs! As summertime.

Moi,
I actually do think water wars will be a big factor in the future.

For decades, the water supplies originating in the mountains straddling the boundaries of the Western Carolinas, have been manipulated to ensure the protection of the Savannah River Basin. Now, the government has
approved a ginormous dredging of the basin to enable a multi billion dollar port expansion to support the coming super tankers. This will destroy the basin as we know it and change the ecosystem permanently.

( That's jobs creation for you!)

Because of an unchanged federal mandate from the 1950's, the waters are still being drained from the Carolinas, to protect the basin being "improved" to accept more crap from China.

Could we be any more stupid?

Serendipity,
I agree with you and Moi, it is rarely a good decision to mess with Mother Nature.

And yes, the lake is still lovely but the joy of living on the lake has changed for most who made huge investments in a lifestyle they can no longer enjoy.

Part of the frustration for them is some of the draw downs are mandated to supply a power plant no longer in production! This energy group can buy surplus power from their competitors for less than it costs to create the hydro-electric power at their obsolete plant! Those who are losing the value of their lifestyle and investment are losing it for no reason!!!!!

Our government is now spending billions to ruin the basin mandated to be protected by the water draw downs. The power plant is not in production so these severe loses are for naught. Our senators and representatives estimate it will take 3-5 years to get the necessary corrections through Congress.

It really is sad to see a region this damaged. Is is especially difficult when it need not be.

ack!! That dredgin' of the basin is a scary thang! Boat while ya can fishy!!

We live near the TVA's northernmost reservoir and have a houseboat (read: floating shack) on it. And as we've heard, they'd be perfectly willing to drain the reservoir to provide enough water for Atlanta's overdevelopment.

The metric for how much water stays in our "lake" is the amount of water is flowing past a particular point of the Tennessee River outside Chattanooga, about 230 miles away from here.

Thankfully, we've been OK for the last few years -- but the threat is always there.

As Serendipity says, the reasons for manipulation are often unclear. Sometimes the reasons, even if clear, are just as maddening.

Sorry about your plight. A client of mine just rotated off eight years on Georgia Ports Authority board. Oh, I'm sure they are so, so proud to be making our harbors even friendlier to, as said here, a bunch more crap we don't need.