Because the Earth grows good here 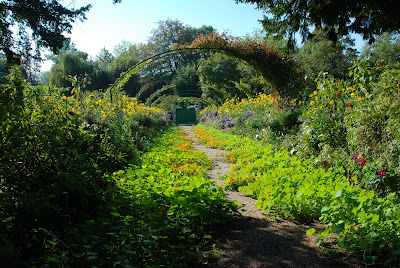 I went first to Monet's garden in Giverny. I had read, long years ago, Monet designed his garden as a painting.  Not that there was a garden he chose to paint but that he had a vision in his head of a beautiful garden he wished to paint. The garden did not exist. In fact, during the late 1880's most gardens were formal. Like the public gardens at Versailles or the
Tuileries . Monet envisioned his garden as "clumps of color" and set about to create his vision. 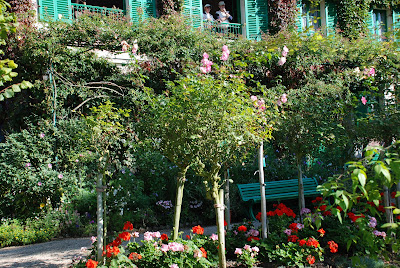 I believe I read somewhere it
was 16 years before he actually
made a painting of his garden.
Once he was asked why he created his garden there in Giverny.
His reply, " Because the Earth grows good here"  Just an hour west of Paris,  within the boundaries of beautiful Normandy
everything appears to grow good. 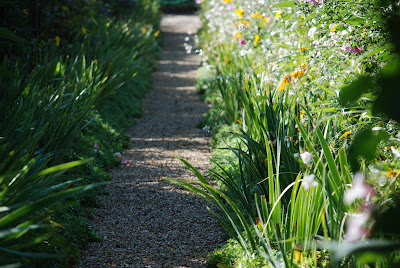 Perhaps one of the most surprising aspects of this visit was the size of the garden. It is huge. Just the garden at the house is huge, not including the Japanese water gardens. There are  stately teuteurs supporting climbing roses and metal arches spanning the pathways for  creating light rhythms while supporting plants at their blooming. It is more than the eye can hold.


Monet did more than clump his colors. He clumped shadow and light, he clumped textures and he clumped all of these at multiple heights. I read about how he begged for seeds and how , over time, few came to visit or paint or study or admire who did not come bearing the gift of a fine new plant. Monet was not a horticulturist, he was an artist and he viewed each species as a component of a composition. I will never look at a garden the same way again.  As a strange aside, as I was experiencing the wonder of Monet's garden I thought, " How I loathe Monsanto! There will be no more century old gardens with terminator seeds". 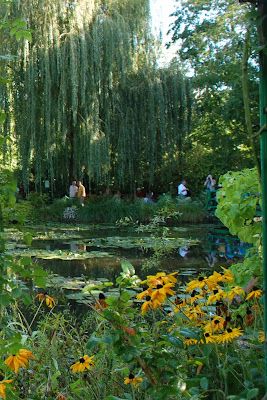 The water garden came after the others. Monet had to buy land across the road, receive a variance  to divert water from a small tributary to the Seine and seek plants not native to Normandy. Most species of water lillies require warm waters to survive. The pond, connected in numerous paintings by the Japanese bridge were positioned so one would be in shadow while the other was in sunlight. There are numerous accounts by Monet's contemporaries of his passion  not for painting the water gardens, but the reflections therein. 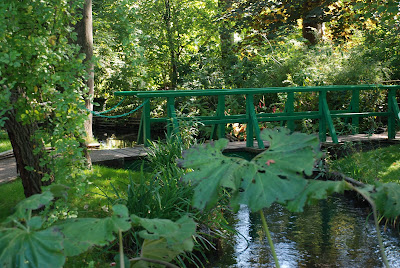 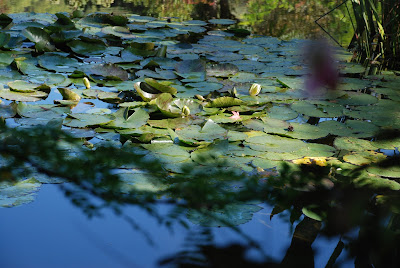 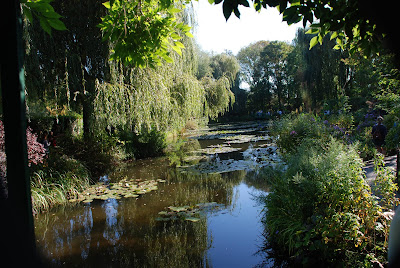 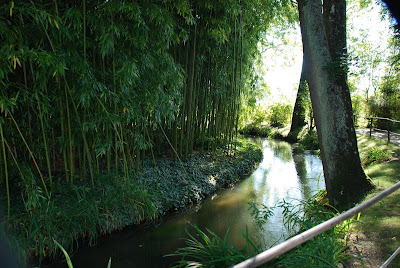 When I look at the actual gardens and think about Monet's pallette I am stunned.
In his early, student days, he used the traditional darker paints. In the Impressionist years he wanted light, not dark. He is said to have organized his painters palette in a very specific order which included just 6 colors: white lead, cadmium yellow, vermillion, ,madder, cobalt blue and chrome green. To paint shadows with light was his mission. A right fine one.

I snapped this one last image as I was leaving Monet's home. 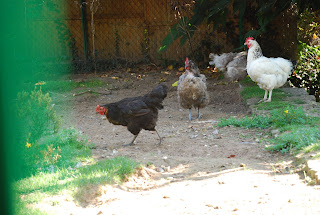 What is the connection between artists and their chickens?

Although I've always loved Monet's Giverny paintings, I'd never heard this story about how the gardens came to be. Thank you for sharing it - and especially for sharing these amazing photos. You're there now?

And bwahahahah to "artists and their chickens."

What a nice visit with you and Monet in the garden! I love the water lily series - who doesnt? I have actually been to Giverny but sort of forgot the details. Its more of an impression (har har) CHICKENS are perfect garden buddies -sociable and great on pest control. Glad you are home and had a great trip!

The Mrs is a big Monet fan. So much so that she wants to go to
Paris for her 50th birthday. We'll see.

I just did a write-up on the Grounds for Sculptures Garden in NJ. I took the Mrs there for our anniversary. A lot of the sculptures there had Monet influences and she really enjoyed that (and made comments to that effect).

Don't they make paint brushes out of chicken feathers?

Eggy,
I am back here, taking a hard look at my own landscaping, trying to think like Monet.
As an art student,(many moons past)
I was very impressed to read Monet toiled in his garden for 16 years before the first painting was ever created. Actually seeing the size of his jardin , realizing the hugeness of the undertaking, I could hardly believe what I was seeing.

Chickory,
I know, from your blog, you also have an artist's appreciation for the inherent beauty of every component of a garden, not just the beauty of the whole. Knowing as you do how much love and labor goes into even a modest garden can you imagine his joy in never tiring of the subject of his garden? He lived into his mid eighties. Sadly his vision had deteriorated from cataracts so he braved primitive surgery in a high risk effort to see. He died from surgical complications.

Buzz,
You are, I believe, one of the good guys. I do not know how much time you have to save up for the Mrs. 50th but I will tell you Paris is shockingly expensive. it is not just the Euro to Dollar equation, everything is terribly expensive.

I saw your write up on the sculpture garden, I sure hope your Mrs. was impressed by you giving up a fine football weekend to focus on her interests. You DID focus on her right?

Don't think I know of chicken feather paint brushes but I seem to remember something about early calligraphy ....

I have a confession to make: I do not like the Impressionists much and find Monet's later works to be awfully muddled. Then again, anything that starts slouching towards abstraction begins to bug me. However, Giverny was awesome, inspiring, breathtaking. Living in the desert as I do, I will never have a garden even approaching a fraction of its verdant beauty.

The detail of yore pics is grand Fishy.

I see ya had fine weather too>

Moi,
I do agree with you about Monet's later works. As his cataracts worsened so did his paintings. Harsh use of color and slashing brush strokes look .... like painted rage.

Beyond all those realities, I am still in awe of the daring idea to conceive a garden as a painting, create the garden, tend the garden for 16 years and then,
finally, get to paint. The fact that Monet knew absolutely othing about gardening, and the fact his garden is still in existence? Wow!

Hey Aunty! It's a fine thing jet leg doesn't happen going instead of coming or there might not be any Giverny photos! It was a grand day and a grand place to start my French experience.

I did finally learn to put my camera down a bit. Seems like at the start of things I was missing the experience cause I was stuck to the camera lens. My big surprise here is I thought I would love his house too. Sadly, I found the use of color so harsh I just could not enjoy it. The views of the garden though, were an eyeful.

Sportsmans Warehouse is the place for outdoorsmen to go for all of their outdoors needs. Shopping for all of your hunting, fishing, camping, boating, and other outdoor sporting needs can be done online with ease and convenience. The online catalog is filled with a huge variety of products that shoppers can sift through in order to find the exact product that they are looking for. Immune Foundation Recovery Clinic * Alcoholics